skip to main | skip to sidebar

Just in time for the holidays! 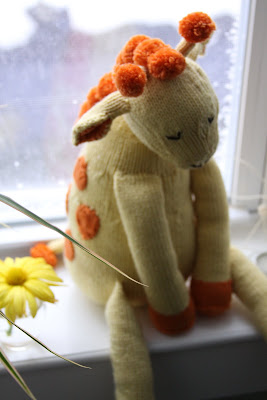 It's a Giraffe! This is the Giraffe pattern from Susan B. Anderson's Itty Bitty Toys that came out earlier this year. I knit this little bugger out of Berroco Comfort (Buttercup and Kidz Orange). 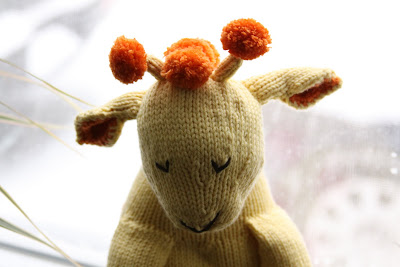 Never thought I'd knit toys, but when I started seeing pictures of finished projects (rav link) from this book on Ravelry, I knew I had to get it! 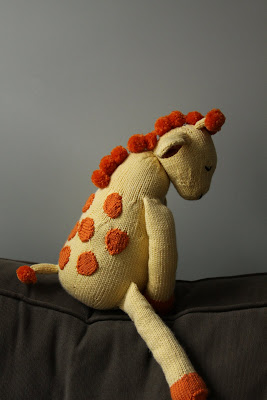 I used barely 1 ball of of the Kidz Orange and just over 1 ball of the Daffodil. It's got poly pellets in the feet and a little in the body. Rest is stuffed with poly fill. I can't wait to see my niece's face when she unwraps it. I'm sure she'll love it!
Posted by Robin at 11:46 AM No comments: 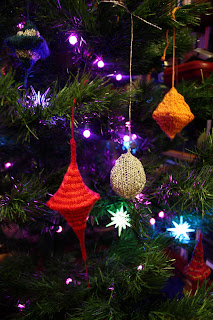 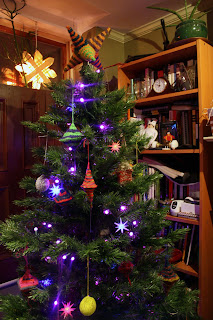 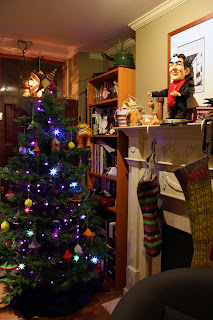 i really like the holidays. i have thought for a good, long time about knitting all the ornaments for a christmas tree one day. and this year, i did it. i am surprised that of all the years i COULD have done it, i managed it in the year i have two children under the age of two, but in a way that was the point -- we needed a very childproof tree this year, so all new, cool-to-touch LED lights -- and knitted ornaments -- were the way to go.

i used ornament "patterns" from debbie new's "unexpected knitting". the star-shaped tree topper is just a larger version of her star-shaped ornament. i really loved knitting the double-funnel pieces, but also did squares, lantern shapes, and spherical things. all the ornaments were blocked with a combination of water and elmer's glue. most were then stitched to embroidery hoops to keep their shape, but the spherical ones had balloons blown up into them. the blocking was much more irritating to me than the knitting. the knitting went very fast and was easy to carry to the playground, etc.

happy holidays!
Posted by knithappy at 7:44 PM No comments: 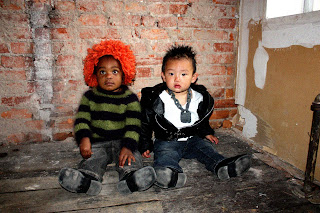 this is probably the last year my children will allow me to dress them the way i want to dress them for halloween. i anticipate that next year i will have to honor requests for disney princesses and star wars or other things i do not care for.

so i wanted to make the most of this year. and yet, my kids are both toddlers who are very mobile and into telling me "NO." i knew their costumes would have to be as close to street clothes as possible, or there would be an instant meltdown.

and so: johnny rotten and sid vicious.

claudia is johnny because of her sense of superiority, her lack of respect for authority, and her political activism. lisa myers helped me get the striped mohair sweater right; i hope that both babies will get some more wear out of it this winter. it was knit in le gran mohair.

the headpiece (i hesitate to say "wig") is a bit... hyperbolic, i think someone called it. just as much ronald mc donald as johnny rotten. but come on, it's halloween. the headpiece was made, like the sweater, with le gran mohair. it began as a piece of knitting, and then sort of spread into sewing and latchhook -- with some tucking, felting, and a little mod podge.

béla is sid vicious, because he is more of a follower than a leader (so far); and, he's a softie, although he tries to make it seem otherwise. also, he had the hair for it naturally. the only thing that was knit for his costume is his chain and bike lock. that was just stash yarn -- it might have been baby ull.

i have already learned to get the "official" halloween picture before the actual parties and events on halloween -- it makes for a much more relaxed holiday. happy halloween! oh, and DESTROY.
Posted by knithappy at 12:47 PM 4 comments:

Dear Rosie Knitters,
I wanted to re-introduce myself because I am listed as a contributor yet have not contributed anything recently to this blog. I've spent my morning reading through all the amazing projects and such and am really inspired by what everyone has created.
I, sadly, have not been knitting lately, but that doesn't mean I haven't been craving all things creative. Reading about all the yarns I missed....oh my goodness.
The good news is the holiday season is coming quickly and I have several new babies in my immediate family. I'm looking forward to rejoining the 'knitting society'.
LJ
Posted by LJ at 7:55 AM No comments: 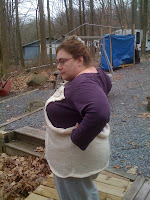 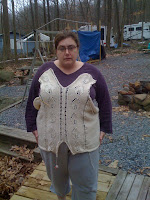 Last year, I took a class at Rosie's, and anxiously ordered yarn to make Joan's Alyce Sweater. It is lacy and made of Classic Elite Premiere, a luxe creamy shiny cotton that I just love! I had a hard time getting started (think of the recent Yarn Harlot post about not being able to cast on the right number of stiches over and over). By my ravelry notes, I had ripped back to row four on March 1st, so everything past the 4th row has been knit in the last month, while I was watching tv. I've actually finished the back and am starting the two small (21 stiches) x 8" pieces that go over the shoulders and come down near the lace panels to finish up the top of the arm holes. Some sleeves, and this will be ready to wear for summer! 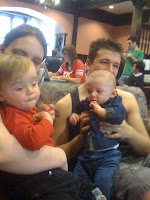 And lately, I am in total grandmom baby love mode. Gabe came down to have lunch with me on Friday, and I happened to have plans to meet with Courtney and Clyde, so there was a playdate. Gabe was very interested in Clyde. But Clyde, having just learned how to walk, and seeing some steps, really wasn't that into Gabe. 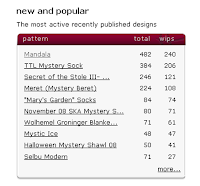 A big Woot for Kate and Selbu Modern! It's made it to the Ravelry new and popular list - making her a Ravelry phenomenon. Thanks for the wonderful pattern, Kate, and thanks to everyone at Rosie's for making cool patterns for us!
Posted by Karen at 9:15 AM 3 comments:

claudia, the pile of leaves 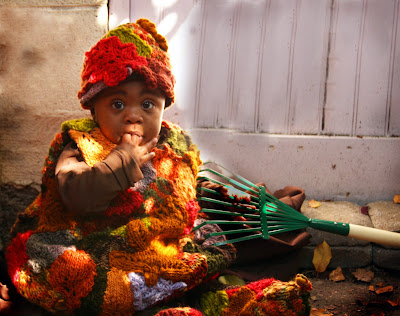 sorry to be posting as "knithappy" again but i don't use blogger for anything but this blog and have a slippery hold on my identity herein.

i am amber, and here is my daughter claudia, previewing her halloween costume. she is a pile of leaves. notice the rake. it is the most important part of the costume, if you are claudia, anyway.

all the leaves are knit from manos del uruguay. quite a few of them are knit from color 121, "cornucopia", of which one might say i am particularly fond. there is a machine-sewn shell under the body, headpiece, and both feeties of the costume. the leaves were then handsewn onto the shell. she is wearing a brown turtleneck onesie and brown cableknit stockings from baby gap underneath.

she can't fit into her stroller in it, but give her the rake and she is happy to sit in one spot and just be a pile for a good long time.
Posted by knithappy at 6:23 PM 6 comments:

Rosie's Knitting Circle meets live every Wednesday night from 6-8 pm at 2017 Locust Street. It is free and open to any crafty member of the public. We look forward to seeing you!